In 2011, Herrenknecht Vertical entered the market of offshore deep drilling rigs with the TI-250 Cantilever rig. Its design focus on process automation and hydraulic systems has demonstrated since then its superiority with respect to work safety and cost efficiency. 16 wells have been drilled or worked over in the southern North Sea until 2016.

Offshore gas and oil drilling is a real challenging job. Staff and technology are exposed to harsh weather while operating heavy equipment. The entire industry is also required to control and cut costs in a tough market, and observe strict international safety regulations.

The TI-250 Cantilever rig was developed by Herrenknecht Vertical in close cooperation with the customer, the Dutch offshore contractor Swift Drilling BV, for workover activities on existing wells and slimhole drilling of new wells in the North Sea. During design and production, a number of components were specially designed according to the customer’s needs. One major customization of the rig design is the fully automated horizontal pipe rack system with pipe boxes, which eliminates the need for personnel in the pipe racking area. The boxes are used to transport and handle the drill pipes and are prepared onshore, shifting costly offshore work to shore.

Final acceptance of the rig package by owner Swift took place in mid-September 2010, at Port of Kehl near Herrenknecht Vertical’s base in Schwanau, southern Germany, where the rig package had been integrated into the cantilever substructure. The cantilever was then transported on the River Rhine to the Port of Rotterdam in the Netherlands, where it was mounted on a highly modern jack-up barge, the Swift 10.

Its first drilling location was 50 kilometers west of Den Helder, the Netherlands, in the North Sea, where it started with a subsea well abandonment job in a depth of 3,200 meters. The operation started on May 27, 2011 and was finished at the end of August the same year. To April 2016, an additional 15 drilling and workover jobs with widely varying depths between 138 meters and 5,275 meters were successfully completed. 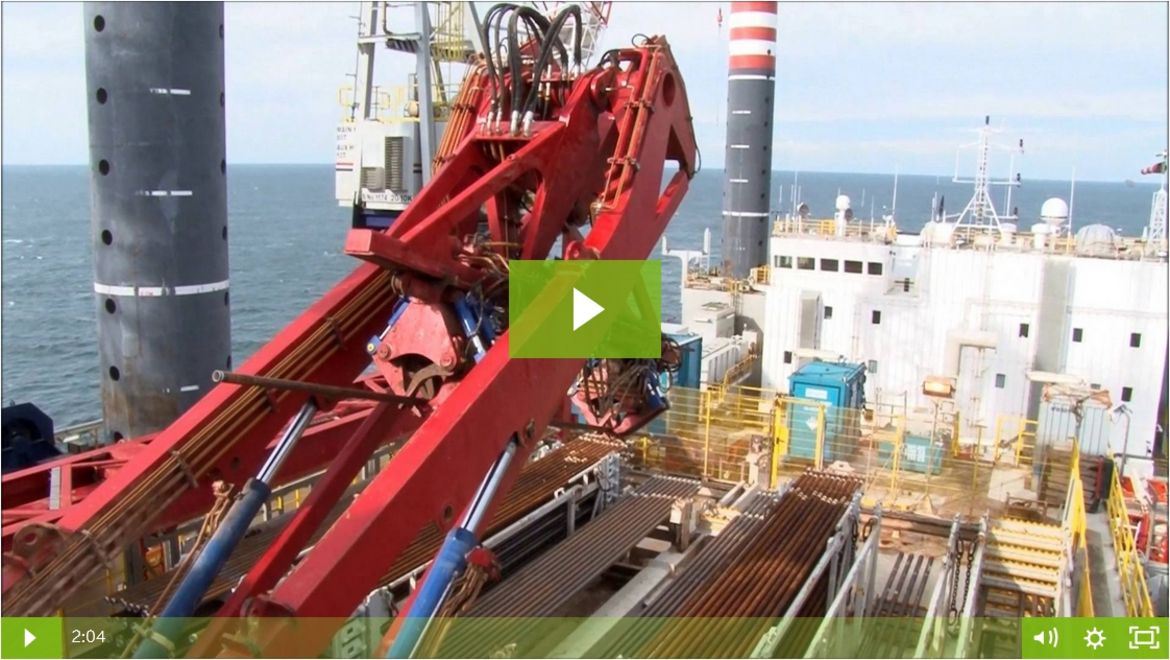 With a maximum accommodation capacity of only 50 to 60 persons for the overall barge operation, the Swift 10 works with a 50% lower headcount than on conventional jack-ups. The crew worked in a much safer environment due to the highly automated hands-off pipe handling system that allowed the driller or pipe handling operator to control the complete handling and racking process from inside the driller’s cabin. The rig gained a safety award from operator NAM for its zero accidents from day 1 during more than five years of operation. The rig’s availability was recorded constantly at above 99% during this period. With this excellent performance, the rig is ranked among the top 3 globally of all jack-ups working for operator Shell. Through its highly automated and customized concept, the Herrenknecht Vertical offshore rig package contributes to reduce overall costs per well by around 40%, states customer Swift.

The complete pipe handling system was designed to handle drill pipes range 3 in super singles, drill collars and casings. The pipe handler has been developed for picking up and laying down tubulars with a diameter of 2 7/8 inches to 24 1/2 inches. The maximum lifting capacity is 3.0 metric tons (3.3 short tons).

The automated, globally unique pipe racking system provides the appropriate drill pipe or casing on the catwalk at any time. The pipe handler picks them up horizontally and brings them directly vertically into the well center position where the hydraulic cylinder hoisting system with top drive takes over.

Distributing the hook load directly into the substructure through the cylinders and pipe racking at cantilever deck level allows for a very slim timbered mast instead of large derrick structures. Reducing mass is not only beneficial in terms of deck load capacity, but this also means reduced exposure to wind, allowing continued operations in harsh weather conditions where conventional rigs would have to shut down for safety reasons.

Send us a message.